Mould spores are everywhere. They appear indoors and outside. As they float around the air, there’s a chance that mould spores can enter your home through windows, doors, air-conditioners or even get stuck on your clothing or pets.

Mould is a harmful bacteria that can cause serious health problems when left untreated. If you believe your home or workspace has an outbreak get in touch with Wet Carpet Cleaner’s mould testing, cleaning and inspection experts.

Water fuels mould spores. If exposed to excess water, mould will begin to grow and create harmful allergens that could be detrimental to people exposed. It’s easy to spot mould as they appear as black, white, green or orange blotches.

While all kinds of mould are dangerous, black mould is one of the most toxic kinds. When water damaged surfaces are left untreated, there’s a big chance of them growing. It feeds on common household and workspace materials like carpet, insulation, drywall or sub-flooring exposed to excess moisture.

Detect Early Signs Of Growth For Mould Inspection In Melbourne 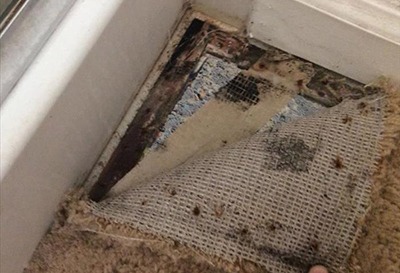 Through our thorough mould testing, we’ll be able to find the source of the problem and get rid of all harmful mould in your Melbourne property.

Contact Us Now For Immediate Mould Remediation In Melbourne

We understand the importance of getting rid of mould. Our mould removal service is available 24/7 for residential and commercial homes.

How do you remediate mould?

If your carpet has been subjected to water damage, the chances are that it is also affected by mould. Mould can be very destructive, and the process of removing it from your carpet should not be taken lightly. The initial steps in removing mould from a carpet are the same as removing any other type of stain.

Whether it is black mould or white mould, you must act quickly and care for the problem. You can easily remove the mould yourself by cleaning and drying the carpet in some cases. Mould is nothing to play around with, and it needs to be taken care of as soon as it starts growing. If you are unable to get rid of the mould, call a professional.

Can I remediate mould yourself?

Whether it is black mould or white mould, you must act quickly and care for the problem. You can easily remove the mould yourself by cleaning and drying the carpet in some cases. If you are unable to get rid of the mould, call a professional.

If the mould is not too bad and the area is small, you may be able to clean it with a mild detergent. Use this method:

If you have tried all the above and cannot get rid of the mould, it may be time to call a professional. You will need to decide whether it is worth spending money on cleaning or replacing the carpet in order to do so.

What is the difference between mould removal and mould remediation?

While mould remediation and mould removal both refer to the process of cleaning up mould, there are some critical differences between the two terms.

Mould remediation is a process that fixes the problem of mould in an environment. This can include removing the source of moisture and repairing any water damage. It also includes cleaning up the mould with special cleaners or by physically removing it from surfaces. Remediation should be handled by a professional.

The main difference among these terminologies is in the process involved in eliminating mould. Mould removal only focuses on physically taking away the mould itself by scraping off surfaces. In contrast, mould remediation deals with all aspects of fixing the problem, such as repairing water damage and cleaning other areas that have been affected by the presence of moulds.

Wet Carpet Cleaners’ motto is to ensure quality service through our attention to detail, green practices and an outstanding customer service. We provide emergency carpet drying, cleaning and restoration services throughout Melbourne.

Wet Carpet Cleaners is rated 4.5/5.0 based on 27 Customer Reviews